Put the dark chocolate in a metal bowl and melt it in a bain-marie. Whip the egg yolks with the sugar separately, add the softened butter at room temperature and a pinch of salt and mix until you have a homogeneous mixture. In a separate container, whip the egg whites until stiff. Add the warm melted chocolate to the egg yolk mixture and mix it. Sift the flour and baking powder adding them to the mixture of egg yolks and chocolate and mix gently to amalgamate. Add the whipped egg whites to the rest of the ingredients, stirring gently. Pour the mixture into a cake mold of 24 cm in diameter, previously greased and floured. Bake at 175 degrees for 35/40 minutes. Then, remove the cake from the oven, let it cool completely and remove it inverted from the mold.

Ingredients for the ganache

Heat the cream in a saucepan until almost boiling and in the meantime cut the dark chocolate into fairly fine flakes. Keeping warm, but not on the heat, add the dark chocolate flakes to the cream a little at a time, stirring firmly. After forming a smooth and homogeneous mixture, if you want you can add the soft butter into small pieces, mixing it completely. Let it cool down. The ganache will have to remain fluid, but not too much.

Stuffing of the cake

Keeping it upside down, cut the cake in half. Place the lower half on a plate, pour part of the warm ganache gently over the surface, so as to cover it evenly. Refrigerate to make the ganache firm. Once cold, place it on a grill upon a larger pan. Gently spread the entire surface with a thin layer of Rose jam and then a light dusting of powdered cocoa. Heat the remaining ganache slightly to make it fluid again. Cover the half already filled with the other half and pour the remaining ganache in order to cover the entire surface including the sides. Store in the fridge until it is cold, then place it on a serving plate and serve.

We're not around right now. But you can send us an email and we'll get back to you, asap. 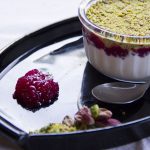